Is this thing on? A week on a comedy TV set with nine other aspiring comedians

Is this thing on could easily be restated as when will this thing be on.

We have just wrapped an intense week of doing a stand up comedy course while also being filmed documentary/reality tv style with cameras everywhere and surprise challenges to ram home lessons while creating great TV.

Is this thing on: The who 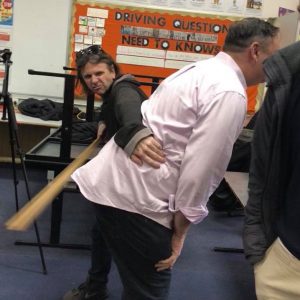 The School Of Hard Knock Knocks runs stand up comedy courses around Australia.

In this week’s course in Melbourne, there were 10 students who had made the decision to test themselves, to see what it takes, to WANT this thing to be on and take the stage to make people laugh.

Our instructor was master comedian, director, and producer, Glynn Nicholas. Glynn’s job was to take us through the course material, covering joke content and structure, confidence, and stagecraft.

The director of the filming of the course, was Stig Wemyss, of Mezzanine Films, an accomplished director and actor who was part of the long running TV sitcom, Col Carpenter. Stig deftly guided proceedings while remaining in the shadows and working expertly with his engaged and professional crew who did their work efficiently while sharing an encouraging wink, nod, or smile behind-the-scenes.

We were also inspired by a cast of comedians who played special roles throughout the week.

Is this thing on: The what

Every day from Monday through Saturday, we learned theory, endured a physical or psychological test, and were expected to spend extra time developing, practicing and honing our material for our 5-minute graduation set on the Saturday night.

Monday involved meeting fellow cast members, performing two minutes of material we’d been asked to prepare before the course began, getting feedback on that, and learning to work with each other. That night, we were taken to a comedy gig comprising a number of School Of Hard Knock Knocks alumni, headlined by Greg Fleet. It was a LONG day. Brad Oakes was the MC and he extended the hand of friendship, welcoming us into the community of comedians and pledging to be available into our futures.

Tuesday involved learning about various joke structures and the importance of being comfortable in our own skins. To drive this point home, guest comedian, Mayumi Nobetsu, took us to an art studio where her son modelled nude for us all to paint, while also being nude. Yes, Mayumi said that by discarding the protective layers of our clothing among strangers, we would become emboldended when on stage. This is the cast of Is This Thing On, just before we were told to get nude and paint a portrait of a nude model.

Wednesday involved break out groups workshopping our material and developing some absurdist material before Jack Levi aka Elliot Goblet joined us to discuss comic characters and dealing with heckling. To force his message home, we had to heckle paintings in an art gallery, while one of us responded on behalf of the art.

Thursday was all about being prepared to cope with audience you weren’t expecting. Comedian, Chris Franklin took us through that challenge and, to test it, accompanied us to a primary school where, one by one, we had to enter a room of about 40 7-10 year olds and make them laugh in a 60-second set. We were given about five minutes notice to prepare.

Friday was about finding the courage to take a leap of faith and walk out onto a stage. So, guest comedian Joe White took us to Skydive Melbourne so we could all jump out of a plane. Sadly, the weather robbed us of the jump BUT we had all gone through the emotional journey of preparing to freefall.

Saturday was a double whammy. Greg Fleet hosted us at the epicentre of the Melbourne Comedy Festival; the Melbourne Town Hall. We got to grace that stage and perform for Fleety before packing up and heading to the Golden Gate Hotel where a packed room of 120 people watched us perform our debut comedy sets. Glynn Nicholas was MC and Greg Fleet was the headliner.

Is this thing on: The takeaway

Much was experienced and learned through this week.

For me, the grand takeaways were as follows.

Glynn Nicholas: Be aware of the little voice that whispers to us we are no good and not worthy of the opportunity. This is a natural, self-protection mechanism but it will kill your ability to take risks and thrive.

Brad Oakes: Brad talked about the difference between comedians and actors. He said comedians seem to be more collegiate and supportive, and encouraged us to go out to open mic nights and get known.

Mayumi Nobetsu: Talked about the importance of being comfortable with how you are. Her trip to do nude painting made a significant difference in the group. Her demeanour was calm and kind and she really made it easy to strip in front of her and the class.

Jack Levi: I met an Uber driver who knows Jack and he said whenever they are out, he is a people magnet. That was so on the day he spent with us. We all leaned in to drink from the “Elliot Goblet” that was brimful with insights. One urged us to explore developing our on-stage characters because that can seed great comedy that might not look funny on paper but just works in the flesh. He then coached us in dealing with hecklers and learning the golden rule of being proportionate in our responses; don’t use a sledgehammer to hammer a nail. Preparing to heckle. Steve Davis with Jack Levi in front of a portrait of his alter ego, Elliot Goblet.

Chris Franklin: Chris was very encouraging in his lessons about saying yes to opportunities and being open to pushing ourselves at any open mic nights we can attend.

Ben Horowitz: Ben’s insight was to see as much comedy as possible, not just for enjoyment but for observing what works and what doesn’t across content and delivery. He especially urged us to watch the professionals.

Steve Van Aperen: The “Human Lie Detector” cast a watchful eye over all of us, to catch us if we slipped. He had very encouraging and insightful things to say to all of us. To me, he said I own the stage but have so much more I could do if I keep practicing. And that is what I intend to do.

Joe White: Joe was a great mentor regarding his “no excuses” approach to preparing, preparing, preparing. He says, unfortunately, a large number of newbie comedians are lazy and don’t put in the effort of rehearsing material until is it baked in. He says we should strive to be the comics in green rooms who are relaxed and chilled before performing, not those who are nervously pacing and looking at notes. He says the green room is NOT the place to be practicing.

Greg Fleet: Greg surprised us at Melbourne Town Hall, the main stage of the Melbourne Comedy Festival with the insight that walking out onto that grand stage really delivers the same amount of nerves as walking onto a stage at a pub or club. He said we should not be daunted by the big venues because the feeling is the same on stage anyway.

When will this thing be on?

For me, this thing will be on soon because I’ve been booked to play at Cranker Comedy in September and Chris Franklin has told me to contact Craig Egan at Adelaide Comedy to explore options there.

I’m contemplating doing an Adelaide Fringe show, and the School Of Hard Knock Knocks is exploring options for further activity and courses in Adelaide.

For the TV show, Mezzanine Films will now be shopping around a sizzle reel to see which networks bite. So watch this space.

If all goes well, I’ll certainly be able to say, a funny thing happened on the way to my new career!