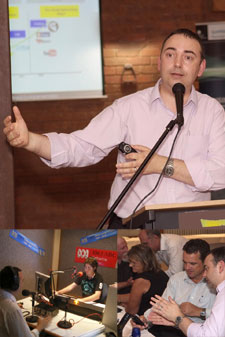 Whether it’s running a marketing workshop, delivering a keynote address, conducting an all-day/half-day/one-hour seminar or just compering an event, nothing really comes close to public speaking.

I think my fascination with public speaking arises from it being a discipline that draws upon theatre, radio, teaching, journalism and negotiation.

Evolutionary biologists tell us that public speaking is often cited as the greatest fear held by most people. They explain it by noting that in the act of public speaking the speaker has many pairs of eyes honed in on him/her and this is deeply symbolic of “threat” in the state of nature. They argue we have learned that when eyes are trained upon us, we must prepare to fight or make flight. So maybe most public speakers are freaks of nature? Or sadists? Either way, I know it is shunned by most people and I must confess that is yet another reason why I am drawn to it.

One the most helpful things I came across early in my career, was an address by a Jesuit who shared that he prepared for public speaking events by stealing a look at his audience before he began and thinking to himself “they are on my side, they have come here to learn from me, they are my friends”. It is a neat little mind trick that works wonders and is almost always based on truth!

Most of my public speaking topics revolve around marketing and the use of the so-called “social web” as part of a marketing strategy. (The social web refers to social media and social networking sites such as Facebook, Twitter, blogging, streaming video, etc).

If you are a fellow “Steve Davis” working in this field somewhere else in the world, leave a comment and link.