Firstly tonight, hello to bloggers in Adelaide. The Adelaide blogging community is having its end of year get together tonight.

China defines internet addiction
China is set to register “internet addiction” as an official condition with the World Health Organisation in 2009. It follows research by Chinese psychologists, and will put the “disorder” on the same standing as compulsive gambling or alcoholism.
China even has hundreds of internet addiction clinics to treat the “disease”.
Here are some of the pertinent facts:

This Times Online article covers most of the details. It doesn’t say whether patients can book appointments online!
The article does point out other dubious conditions, such as:

You can read this great article at Times Online.

Top ten most annoying phrases
Oxford University boffins have defined the most annoying phrases cluttering the English language. Here they are:
1 – At the end of the day
2 – Fairly unique
3 – I personally
4 – At this moment in time
5 – With all due respect
6 – Absolutely
7 – It’s a nightmare
8 – Shouldn’t of
9 – 24/7
10 – It’s not rocket science
The list appears in a new book, Damp Squid: The English Language Laid Bare, by Jeremy Butterfield. And the link I have provided is to Wired magazine’s coverage of the story and the expansive list of comments readers submitted to the post. Ironically, one reader dropped a clanger while venting with some of their own hated phrases by saying, “For all intensive purposes this sort of list …” The saying should be, “for all intents and purposes.”
The comments also collect other jewels, such as:

Frugalous
Frugalous is a site designed to combine “frugal” and “fabulous”. It has been around since June 2008 but I expect it to see a boost in traffic during these times of gloom (caused by some financial woes and exacerbated by panic-peddling mass media).
The author of the blog is Merlene Paynter who explains the origins of the blog thus:
“After 19 years of marriage, and being a stay-home mother to two kids, I’m ready to make some changes in my life. I’m tired of carrying debt. I’m tired of worrying about bills. I’m tired of living a big life. So I’ve ended my marriage and am selling the house – a hard choice. I really love my house, my neighbours, etc. – paying off all of the debts and moving into a 2 bedroom apartment which will neatly cut my living expenses in half.”
When I read that piece in her biography I almost didn’t promote this site because if she really did just toss away her marriage like a dirty towel, it says to me she is careless, thoughtless and selfish, and not somebody you want to model. However, I expect that the decision was not just an act of flippancy but rather she has framed it that way in an attempt to sound hip and happening. But I digress, this is not a relationship counselling blog …
Thankfully, there are some wonderful recipes on this site and some helpful tips to guide us in being frugal not only with money but also with our time. Some of my favourites include:

You can read this blog at http://frugalous.com/. 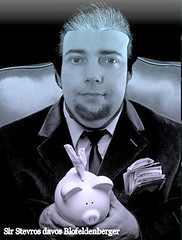 You can be a Bond baddie at http://www.beabondbaddie.com/, which gives you the chance to upload a picture of yourself, merge it with a sinister looking character (male or female) and then email it to friends, add it to your Facebook profile or save the link.
Your character also gets to choose from a number of sayings – I chose “allow me to introduce you to my little friend”. Quite a happy, innocent sentence, except when spoken in a deep, gravely, pseudo-European accent.
You can see and hear me as the notorious Bond baddie, Sir Stavros davos Blofeldenberger, here.