This month on Online Insights we shall see the light, then move from the old world to the ‘other world’ and come to rest in the inner world. Sounds mysterious but don’t fear, it is me and Sean Perry, you will not be spooked! Before you dive into the actual stories, I also encourage you to read my VENT over the Guardian Three Little Pigs video about social media that is all the rage at the moment. I argue that rather than support the social enmeshing of news, it is the most poignant argument against the 24-hour news cycles that surround us. 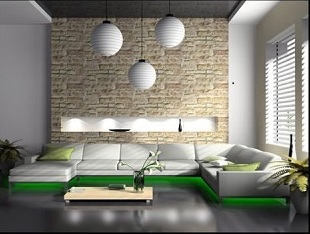 One of his pet subjects is LED lighting and he says he is on a mission to help the world ‘see the light’ in a smarter, more cost-effective way.

He has written an article about how LED lighting saves you money and saves the environment. Here is his argument:

Modern LED globes cost more than other lights to buy but use much less electricity and last longer, paying for themselves in no time.

He then does some maths. Basically, it costs an office or school about $43 a year to run an old fashioned fluro but only $21 a year to run a replacement, LED tube. In fact, something really intriguing is that within the last six months, new LED tubes have come out that contain a wifi device. This means that without having to wire in anything special, you can control your lights from a computer or smart phone! I think I am seeing the light!

At home or in restaurant settings (restaurants are often set up similarly to homes) the savings can be dramatic. Your typical downlight, you know, the ones that were all the rage. The ones that burn really hotly and often lead to fires. Or they just burn out quickly. Well, those old halogen downlights cost $30 a year to run compared to less than $3 for an LED replacement.

You can read Jon’s article for the wattages and full details about LED lighting.

Suffice to say, his story about a restaurant which could cut its light power bill from $1500 a year to just a couple hundred, is quite compelling.

But there is a warning. Jon says the technology is moving quickly but you still need to buy the best. LED lighting is one of those areas where you get what you pay for.

Interestingly, this piece by Jon brings full circle an issue that was raised with me by a lighting retailer. She said you need to be really clear about your lighting needs when working with a builder. She says too many of them view lighting as a necessary evil and if you leave it to them, they will leave it to the electrician who will just ‘whack in’ rows of downlights. She says the rip off is based on the fact that downlights require more cabling and can be charged at a flat rate per fitting, racking up the costs for easy work.

From what I understand from Jon’s article, modern LED lighting DOES warrant the extra work and some of them just fit inside standard fittings meaning a win-win because ongoing costs are low. 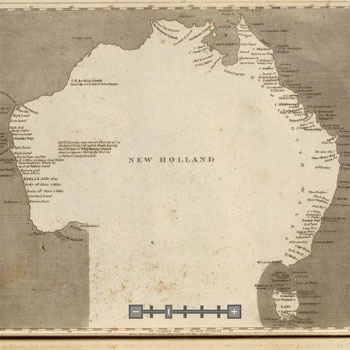 A friend pointed out this website through the week.

If ever you wanted to rekindle curiosity about history and marvel at how far technology and knowledge have come, old maps online is the perfect solution.

On this site you can dial up maps of countries around the world from the year 1000AD to the present day.

I found a map of Australia made in 1804, when Australia was known as New Holland. From Van Diemen’s Land (Tasmania) to the southern tip of WA, the map was blank.

Next there was an 1822 map of South Australia called, Partie de la Nlle. Hollande. Oceanique no. 54. I was staggered by how big Kangaroo Island looked. But guess what? I checked against Google Maps and I must say, Kangaroo Island is huge! In retrospect, I should have had more trust in the navigators and map makers of old because they were much attuned to the stars and the sun and had to be. They set off for months at a time and if mapping was not up to scratch, it would have meant disaster.

Next I looked for older maps and found one of London from 1666 and, hauntingly, it has large parts left blank, signifying where the great fire of London swept. One of the streets I noticed was called Cheape Side – they certainly weren’t backwards in being forward!

This is a fascinating site and I encourage you to explore Old Maps Online. In a recent episode of The Good Wife, there was mention of a ‘death’ website during a murder investigation.

A quick google revealed My Death Space, a site that has been archiving the profiles of deceased MySpace and Facebook users since 2005.

A quick look at the site shows a list of death notices, covering the names and methods of death of people.

Most of the people mentioned are just ‘ordinary’ human beings and the articles for each one includes a link to their MySpace or Facebook profile.

This macabre site actually raises an interesting point. Social networking sites have been started by young people and little thought has been given to appropriate netiquette for dealing with a dead person’s social media account. In fact, with numerous tools, you can program fresh content in advance so it will soon be common practice to have loved ones tweeting from the grave. We need to prepare for situations like that.

I did notice Christopher Hitchens in the list, the late journalist and thinker who died late last year. I followed the link to his Facebook Page and was surprised to see fresh posts as recently published as last week. As it turns out, the Facebook Page was created by fans and friends as an online place to gather and share stories about the great man.

Makes me wonder if this can be considered a form of immortality?

Controversially, the article reports this final essence of his character: He took pains to emphasize that he had not revised his position on atheism, articulated in his best-selling 2007 book, “God Is Not Great: How Religion Poisons Everything,” although he did express amused appreciation at the hope, among some concerned Christians, that he might undergo a late-life conversion.

The site also has sections on Missing People and Criminals. The latter section is very strange. It allows people to dob in ‘known’ criminals by sharing links to their social networking profiles.

My final reflection is that this site is not for the faint hearted (or you might end up in it). If you worry about things that can go wrong in a normal day, this site catalogues hundreds more that you never dreamed of, such as dying during wisdom teeth surgery or being hit by a stolen fire truck.

My Death Space can be found here.

I need a better title 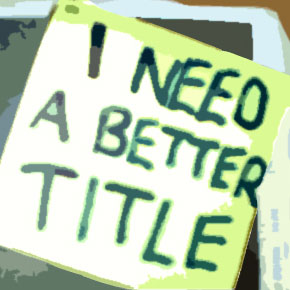 Tim Harvey is a young writer in Adelaide whose blog is smartly named, I need a better title.

I was put onto it by his mum, who is a friend on Facebook and a regular FIVEaa listener.

However, you have to take mums’ recommendations with a pinch of salt, no offence, because they are typically biased.

But when I read his first story, I could see this was a blog that others needed to know about.

I would be interested to hear what you think of Tim’s writing. He seems to have a gift for dialogue; his characters interact naturally. And like well-seasoned writers, his opening drop you right in the scene and start painting pictures, such as:

But one quirky piece I enjoyed immensely for its insight was ‘Ken’. This simple conversation between two mates, captures the ever-present tension between what men need from women and women from men. Both similar but worlds apart. As they analyse why Barbie is attracted to Ken, they realise Ken is a pre-packaged man. It is not his money, per se, it is the fact that he is ‘together’. As one of the characters reflects on what he wants from a ‘Barbie’, he shares”

And the characters realise that therein lies the rub. They need their female partners to spark them into action on the road to self-fulfilment, but their experience of women suggests members of the opposite sex simply prefer a ‘pre-packaged man’.

Visit I need a better title and see for yourself.