Online Insights on FIVEaa Sunday May 13 2012

This month on Online Insights we drive down memory lane in Adelaide in full technicolour, discover a resource to stop grey-haired people around you turning your hair grey, recoil at Vegemite’s woes and discover what brand you would be, given your personality.

I have started a new habit.

It is so cold and dark at dinner time these days, that I am alone at the BBQ while the family is inside. So I arm myself with a glass of wine and my iPhone, dial up YouTube and throw in a random search term.

However, the first term I have been using is ‘Adelaide’.

Apart from a particularly nauseating case of road rage, the second video I ever found was some Film Australia archival footage of Life in Adelaide shot in 1966. It runs 20 minutes and is very, very intriguing.

You get to see grapevines growing in the suburbs, red and white taxis, old rotary dial phones, the Cox Foys playground atop its Rundle Street building, the Paris nightclub, and all the retro finesse that you would expect to find in Mad Men if it were situated in Adelaide.

I showed my barber, Don from Harrington’s in Prospect, and he helped me identify some of the locations.

Actually, I showed him because at 11 minutes and 32 seconds into the clip, a shop assistant appears (in a downstairs dress shop) with what I thought was an iconic beehive hair do. Don blatantly told me it was NOT and that it was one of the least stylistic hair dos he had ever seen. I would love your opinion – we’d both also like to know what shop it was.

But there is one scene that has posed a question that has has even more deeply intrigued. At 12 minutes and 20 seconds into the clip, the couple visits a restaurant that has an open air section under vines with a blackboard wine barrel on the white wall. We both know it but cannot name it. Can you? Its picture is above.

Reading the comments from the last couple of months alone on YouTube is a little amusing, here is a snippet:

If you would like a trip down memory lane, or to help us solve our mysteries, take a look at this.

You can choose to visit the clip on YouTube.

PS Another highlight is the glimpse inside the Holden factory where workers are inserting windcreens and lowering bodies onto chassis wearing nothing but t-shirts and shorts! We have come a long way.

If you have ever had to help a non-IT literate friend or family member solve a computer problem or even learn how to use a mouse, have I got the site for you!

Forward IT is an initiative of the State Government of South Australia (DFEEST) and is a treasure trove of very, very, very simple, easy-to-follow tutorials on all aspects of using computers and the internet and it’s attracting about 2,000 visitors per month.

I got to meet the team behind ForwardIT last week because I’ll be writing some new tutorials for them from the perspective of people starting out running a home-based business.

But the site is pretty full already with tutorials covering such simple but fundamentally important things as:

Just in this tiny sample, you will find resources that you can refer the people you love to, saving you from going over the same mundane procedures countless times at crazy hours while nurturing your love for them!!

Here is the introductory video:

We know the tutorials work because one of the team members used her 87 year old mum as the guinea pig. Quite a fitting insight for Mothers Day!

Before you fret about exploitation, the mum got a brand new iPad 18 months ago to do the testing on – she had never computed or even typed before.

She had email and youtube demonstrated to her on that fateful Christmas day.

It seemed to have worked because here is what followed:

I think the ultimate proof is that our 87 year old guinea pig is now the IT ‘go to’ person for her 96 year old next door neighbour, who decided to get an iPad too when she saw how it could be used.

I must recommend the iPad tutorials and even the Forward IT iPad app, which certainly unlocks the mysteries of this popular tablet computer for those who are new to computers.

Visit Forward IT yourself and make sure you make it the home page for ‘newbies’. (NOTE: Must let them know that only www works. When you drop www from the address the URL fails to resolve to a location – might be a temporary glitch).

Aussie Delicacy Vegemite Loses Some of Its Savory Appeal

It seems an Aussie icon is struggling to reinvent itself in the modern era.

I talk about Vegemite, as covered in this Wall Street Journal article, Aussie Delicacy Vegemite Loses Some of Its Savory Appeal.

According to the article, Kraft’s attempt to get more Vegemite into our stomachs with My First Vegemite, a low salt version to help mums get babies hooked, has ‘fallen flat’, with a mum from Canberra claiming, “I refused to try the kids’ version … part of the appeal of Vegemite is the saltiness.”

The article highlights a few scary facts for Vegemite:

We all remember the failed attempt to be hip with iSnack 2.0 ( a Vegemite and cream cheese concoction) so it is good to hear that Simon Talbot from the Melbourne office is quoted as saying, ‘We just need to get more Vegemite to them in a better way, rather than try and reinvent a new product.’

Part of me thinks the company should relax and be content with itself as a staple, maintaining supply as a nice little cash cow without risking damage to its reputation.

What I particularly enjoyed in the article was the highlight on what its competitor, Marmite is doing. Instead of trying to be hip and cool and almost ‘tricking’ people into trying it, Marmite is on the offensive, polarising people to ensure its fans stay positive:

‘Eat Marmite? You’d rather rip the wings off live chickens. You’d rather be naked in public. You’d rather swallow rat’s tails and snail shells…. Enough already! We get the picture,’ the Marmite-supported Hate Fan Club website proclaims.

Maybe Vegemite just needs to try the honest approach – it is salty, loaded with vitamin B and an acquired taste. Enough said.

You can read the article here.

What brand are you? 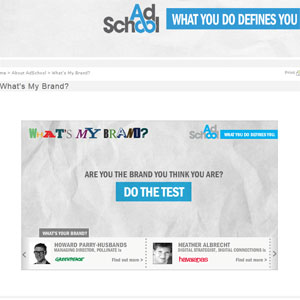 Given our chat about Vegemite, I was primed for the What’s my brand? test by Ad School when it floated across my Twitter screen this week.

This simple test helps you determine which brand your personality is most closely aligned to.

Now, if you are using an iPhone or iPad forget about it. It uses Flash and will remain invisible, but if you have a standard computer at your disposal, click on through to discover your brand.

For the record, I am Telstra, for a whole host of astrology-like reasons that I have forgotten.

Take the test at What’s my brand?