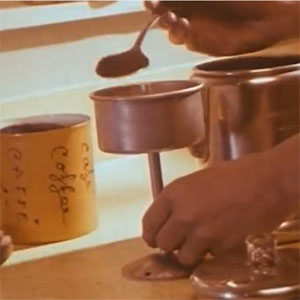 This is coffee: 1961 (by the Coffee Brewing Institute)

This month on online insights we look at latest detailed statistics on who is using social media in Australia, privacy on social media demonstrated a new way, remind you of a computer test you must run tonight, and we’ll finish up with a cup of ‘warmth and vigour’.

Late last year, the FBI shut down a criminal network that had worked out how to put a detour between your computer and the internet. It actually takes over the Domain Name System settings (called DNS settings) that connect the internet addresses you type in to your browser into what are called IP addresses where websites are actually based.

As a result, when you type in your bank website addresses on a computer that has been compromised this way, you can end up going to a fake copy of your bank’s website. When you try logging in you actually are handing your details over to the crooks. The best case scenario is that they just lock you off the internet.

The Australian government has been working with the FBI to help businesses test and recover from this attack. For the last few months, a quick online test has been available for you to run.

That test gets turned off tomorrow night.

So now is the time for following this link and seeing whether you are affected or not.

Take the DNS Changer Test Now (this link will stop working after July 9, 2012)

It will talk you through what to do if your test is negative.

Who is using social media in Australia? 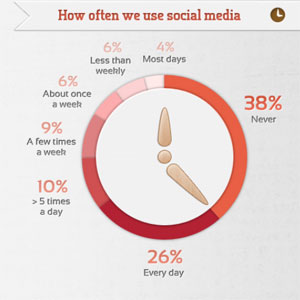 Australian social media survey by a Sensis and Digiocial

I was looking at some research on the habits and patterns of Australians and how we use (or don’t use) social media and had planned to share this last weekend (Social Media Day weekend).

This particular research by Digiocial is based on data collated by Sensis.

Here are some of the most interesting findings:

In South Australia, if you use social networks there is a:

What is interesting, however, is that actual Facebook numbers show 751,000 South Australians on Facebook, which is 45% of our 1.66 million population. If these Sensis figures are drawn from the 68% of respondents who said they use social media and 97% of them claim to use Facebook, then that number should be 1.09 million (66% of the population). That is a big gap suggesting there is a large margin of error between the Sensis figures and reality, and/or a large difference between the national averages used to headline the report and readings of any particular state. So with all numbers, especially from companies like Sensis that are in the online directory game (the sample group may well have skewed results), take them with a pinch of salt.

What is most interesting about the dominance of Facebook (whether 45% or 66% of our population) is that it feeds into my thoughts that it can play a big role in helping elderly or disabled people diminish loneliness and isolation in their lives. Last Saturday, June 30, was Social Media Day and I sat down with a buddy of mine from Melbourne (who also works with Social Media) and chatted for about half an hour on the topic of Relationships in a Time of Social Media (that link lets you listen to the interview on your computer).

What was clear from our chat and these statistics (even if they are a bit wobbly) is that social media and in particular social networking sites are truly established within the lives and habits of everyday Australians. It also means that holding out against joining in, at a personal level, is similar to deciding not to have a phone and then wondering why nobody calls you. Okay, not quite there yet but is close.

In the social friendships debate, I was arguing that the nature of friendship is undergoing change and that it is okay to call someone a friend, even if you have never or rarely spent time with them face to face. As it turns out, the face to face factor is largest with the 14-19 year olds in the Sensis survey – this cohort had seen 70% of their online friends in the previous year, whereas 50-64 year old had seen only half of theirs.

But this is the value of online friendships – it is not bogged down by the obstacles and inconveniences of physical travel; it can lead to more regular contact.

Last set of numbers worth noting is the number of followers, contacts and friends online:

While that group of figures looks wrong to me, what looks most strange indeed is the gender breakdown. The survey also shows that men have an average of 246 to 211 for women, and yet women outnumber men on Facebook alone (in SA there are 403,640 women compared to 338,540 men). It may be that the abnormally high reportage of Linked In, at least for Victorian numbers, has skewed this report, or it could simply be the nature of a small sample. Still, like all surveys, it brings an opportunity to reflect.

Take a look at the figures, run your own sums, think about your own use of social media, and let me know your thoughts. 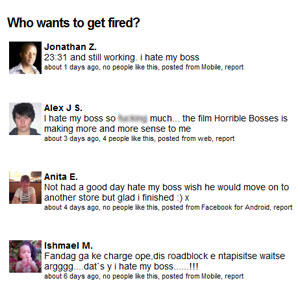 An online site is running now that creates a live feed of what people are talking about in Facebook, especially when mentioning how much they hate their bosses, how hungover they are, how much they enjoy smoking weed and what their new telephone numbers are.

It’s being run by Callum Haywood as a privacy experiment.

It only draws comments that are made public – remember, every time you post a status update on Facebook, Google+ and some other social networks, you can choose whether your update goes live to the world or just to your friends.

Callum’s argument is that his experiment should scare people into action so they remember that when they hit PUBLISH if they have not chosen to share only with their friends then the whole world is potentially the audience.

Here are some examples:

So there you have it. The grammar is the most horrible part of this site. Apart from that, it would be wise for bosses to monitor it because most of the ‘I hate my boss’ comments are incoherent and superb evidence of why the feeling would most likely be mutual. Hangover comments are just embarrassing whereas the weed comments are really ‘fried’ – makes me more concerned about marijuana than ever before.

One final observation; none of the weed comments include ranting about a boss. Could this be because weed smokers are unemployable?

Take a look at we know what you’re doing then make sure you are conscious about your privacy settings on social networks!

Coffee has been with us for centuries but it was not until the Italians perfected espresso that humankind really got to taste it at its richest and best, in my humble opinion.

That is why I am bemused by trends in some cafes to bring back syphon coffee makers and plungers under the banner of being cool, chic and ‘designed to bring out the subtle flavours of the bean’. Piffle!!

I think this is why the this video grabbed my attention. I shows all the wildly boiling, thin and scalding methods for making coffee that Americans thought was the height of civilisation in the 1960s (possibly still do today with just a few exceptions).

So, without further ado, enjoy these lovely cliches and archaic coffee making styles as you heap a few spoons of instant into your enamel mug 🙂

Listen out, in particular, for such gems as:

perfect coffee, sending its glow into our lives around the clock;
it helps us start the day with warmth and vigour
it is a pleasant splurge during the morning’s work
it provides the essential part of our pause at noon, indispensable in that unhurried hour in a world that often forgets to stop
in the romance of evening when young dreams blow softly, coffee is always the perfect companion
and after dinner it is at home in any setting when good taste is important

in this beverage that has become so much a part of our lives
there is a background
a tradition that reaches deeply into the culture of many lands
its beginning, under warm tropical sun (actually, sweltering, humid heat)
the care and attention to which it is treated during its journey from tree to cup
the many processes it must undergo are all devoted to creating good coffee (or avoiding starvation)
with its secrets of aroma and body and taste, to which the talents of millions of men are devoted, during their lifetime (irony here, the picture is of peasant women sorting the beans and picking out bad ones)

in the end it remains
a simple thing, easy to attain,
well made and well enjoyed,
a good cup of good coffee