We do a little IT trick to spread your wireless connection farther, duck our heads, and then get ready for a feast of the revolting and the delicious.

Waiter, waiter, there’s a fly in my food 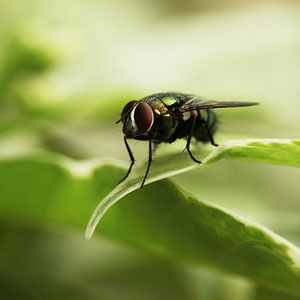 The common housefly, destined for your food (Image VinothChandar via Flickr)

This weekend has been playing host to a conference for food bloggers and writers in Adelaide, so to mark the occasion I am leading off with two food stories.

The first story is one from the New York Times entitled, The maggots in your mushrooms.

This alarming story focuses on the levels of contamination allowed in food BEFORE action is taken by authorities. For example, this piece reveals that producers only get into trouble when:

According to the article, Americans consume about a kilogram of flies, maggots and mites each year without knowing it.

The FDA makes it easy to find these tolerances, in a booklet called, The Food Defect Action Levels: Levels of Natural or Unavoidable Defects in Foods That Present No Health Hazards for Humans.

A quick survey of the FSANZ (Food Safety Australia and New Zealand) didn’t bring up any such booklet (it might exist, just a little hard for an outsider to find) but I did come across a report on Australia’s poultry processing industry on Australian Food News.

The story from the National Union of Workers claims:

The story has the union claiming that current laws do not protect workers and companies escape punishment.

But just before you dive into a fruit platter for safety, think twice if you choose figs. A Smithsonian article reminds us that fig trees only bear fruit because of kamikazee insects.

Fig wasps are hatched inside figs. The females escape, picking up pollen from the fig tree flower as they leave, lay eggs inside a new fig nest where they die. Males who hatch inside the figs mate with the females but they get stuck inside the fruit after chewing escape holes for the females.

Cheese platter? Don’t get me started … 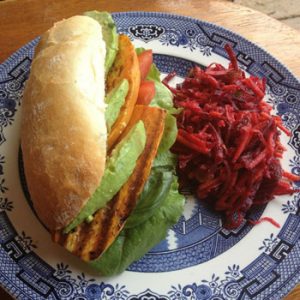 On a lighter food note, I met an Adelaide woman, Lisa Fabry, in a workshop recently, and she told me about a Vegan Lunch Group she started on Facebook.

The idea is simple: The group is open to vegans, would-be vegans and people interested in bringing more vegan food into their diet, who want to share their lunch ideas, be inspired about what to have for lunch or ask questions about vegan lunches.

What I like about this is that I have very little chance of becoming vegan BUT I want to add more interesting vegetable and salad dishes to my diet and who better to get ideas from than vegans.

A vegan is someone who abstains from animal products because of a philosophy of not wanting to exploit animals. While this means giving up meat and fish, some give up dairy products, eggs and even honey.

A few recent lunches have included:

Australian hotels seem to have the WORST wi-fi offerings in the world, according to a number of colleagues and acquaintances who travel much more extensively than I do.

The rule of thumb seems to be the the more expensive the hotel the worse the connection.

It also seems that many hotel operators have little idea about what HUMANS actually DO and NEED as part of a NORMAL daily routine in 2012, such as respond to emails, scan newspapers, read books, do work, file notes, send pictures, stream entertainment and even have short web video chats with colleagues and loved ones.

I decided the industry was too backward about seven years ago and decided to always travel with my own wireless broadband dongle so that I can take matters into my own hands.

When you see those little cards in hotel rooms explaining how to access the in-house internet, sometimes delivered wirelessly and sometimes delivered via cable, I always wonder how many people bother using them. One article from Lifehacker Australia, actually captured some statistics from iBAHN, which actually runs those services in 3,000 hotels in Australia. In essence, iBAHN’s own figures show 80% of us want free broadband in hotel rooms.

Some interesting comments include the term ‘bed and broadband’ and the thought that internet connections should be viewed like towels – included as part of your stay.

This whole topic was put into context for me when a friend told me he had recently stayed in a remote village, high in the mountains of Indonesia, surrounded by extremely primitive villages, but got offered fast, free internet connection which actually worked!

So, while the Australian Tourism industry wakes up to the demands of the rest of the world (you could spare the big budget TV ad flops and fund free broadband EVERYWHERE, still come out in front, but actually get Australia talked about online – watch the travellers come!), you might want to make use of a free service called Connectify.

Connectify is a free piece of software that allows you to share your laptop’s internet connection with your smart phone, tablet or other internet device.

For example, over the weekend, I hooked up my laptop and my wife was able to use her iPad. Work colleagues could equally share one connection over two computers, etc.

The service is not perfect and can drop out unexpectedly BUT it does work and it can help you squeeze extra value out of your broadband dongle when you travel with multiple devices.

If ever you wanted proof that many drivers ignore signs, please watch this short video of a rail bridge in Durham County, USA.

My little girls were fascinated by it and thought it was hilarious.

I chuckled BUT was also horrified at not only the lack of awareness by these drivers, especially because the drivers behind them had to dodge or cop the flak.

Here is the article about the Bridge of Death.

Here is the video: